The purposes of this survey research were to (1) study the public's perception of information regarding entry to the ASEAN Economic Community (AEC) in 2015, (2) study the information needs of the public regarding entry to the AEC, and (3) study the factors that affect the level of public perception regarding entry to AEC in 2015. Questionnaires with an Index of Congruence value at 0.80 were used to collect data from 420 residents in Bangkok and surrounding provinces selected by the multi-step random sampling method. The data were analyzed using frequency, percentage, mean scores, standard deviation, and one-way analysis of variance (One-way ANOVA ).

Moreover, it was found that Bangkok residents of different genders, ages, and incomes have no differences in the level of perception of the ASEAN Economic Community. However, differences were found among those with varying education and media exposure. 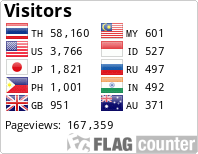