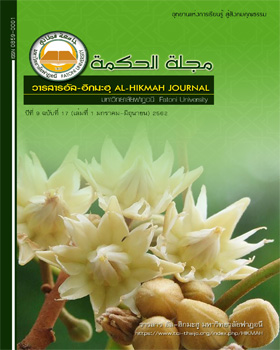 PDF
Keywords:
Key words: demand of the community toward the academic services, the Office of Academy and Community Services, the College of Islamic Studies

The objective of this survey research is to study the demand of the community in the Deep South of Thailand toward the academic services of the College of Islamic Studies (CIS) of Prince of Songkla University, Pattani Campus and to compare the service of CIS with the service of the Office of Academy and Community Service in order to find the best way to support and develop the services. CIS has set 384 purposive sampling and divided the samples evenly.  The samples are composed by the religious leaders, women, housewives, teachers of Islamic private schools, government officials, staff and members of co-operatives in the southern border provinces. The samples were asked about their needs toward the academic services of the two organizations. They were also questioned in an in-depth interview on the promotion and development of the community service of CIS of Prince of Songkla University, Pattani Campus.

The researchers used the descriptive statistic for the data analysis. The result of the study shows that as the following:

1) The dissemination of knowledge. CIS should educate the community about the agency management. It should also promote text books, translation works, and articles about the Islamic studies. The operations should be carried on by utilization of modern technology and the online media.

2) The counseling. CIS should focus on the application of the Sharia law in many daily activities such as the training on moral and ethics development, the mediation system, the premarital training, the social assistance, the fund supports for orphans, misfortunate people, and those who are unemployed.

3) The religious problem solving in the community by seeking cooperation with external organizations.  CIS should be the mediator in the connection and conflict solving within the community.

4) The preservation of art and culture. CIS should hold activities to promote the local arts and cultures. However, the types of the events should be under the framework or in line with the teaching of the religion. It might include the display of arts, the history of well-known people in the past, the researches and studies about beliefs and the Muslim Melayu way of life.

Key words: demand of the community toward the academic services, the Office of Academy and Community Services, the College of Islamic Studies